Stephen King Battleground and other

Stephen King Battleground and other

I don't post much but I figured I would ask a couple questions. First though, I would like to thank the moderator of this site for doing the leg work and posting "US limiteds," "UK limiteds," and "1st editions." It is a nice tool to gauge pricing and also what books are out there.

Stephen King's Battleground. I noticed it is not on this site. Is there a reason why it is not posted in any of the US categories? Is it a book that people think is not a true King edition then?

Also, Cemetery Dance came out with a slipcase for a Scribner edition of the Talisman/Black House books they re-produced. I noticed this set is also not listed on this site, but the black slipcase two book signed edition is. Is there a reason for that as well? Thanks for the information guys!

I have the King signed one. Don't know why it's not on here.
"As Stephen King’s Battleground . Colorado Springs, CO: Gauntlet Publications, [Spring] 2012,
hardcover, p. 19-26. ISBN-10: 1-934267-30-9. ISBN-13: 978-1-934967-30-1. Limited edition of
26 lettered copies, signed by signed by Brian Henson, Jeff Beal, Jeff Hayes, Michael Wright, Lee
Romaire, Bill Haber, Sam Nicholson, Richard Christian Matheson and Stephen King. Note: This
book also includes Richard Christian Matheson’s script for “Battleground,” which was the first
episode of the television series Nightmares and Dreamscapes: From the Stories of Stephen King ,
Brian Henson’s storyboards from the episode and additional material. Also included is a DVD
with the “Battleground” episode of the show and supplemental bonus material." 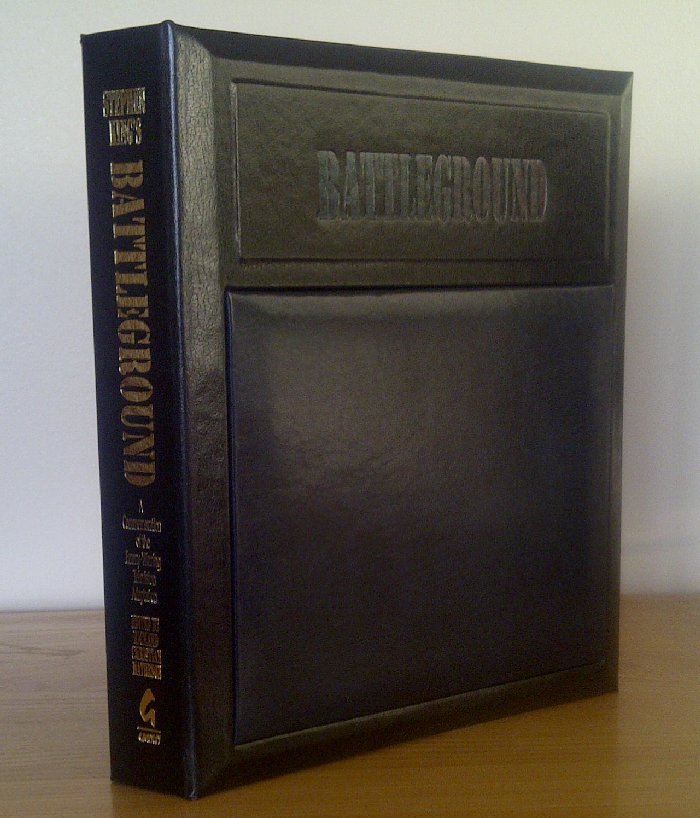 I forgot there was a signed lettered for Battleground. There is the artist edition that is signed, which I have, plus the first edition. Just wasn't sure if people consider this book a King book since I don't see it here or listed at DT. Thanks!
Top

Battleground sort of got glossed over, as it was more of a movie tie in than anything else and only the 26 copy lettered edition was signed by King (at least that's how I saw it). If folks want it listed here I can add it to the "to-do" list for the site though.

As far as CD coming out with a slipcase for the Scribner edition of Talisman/Blackhouse, CD announces cases for the trade edition of just about every SK book the day it's announced these days. I don't cover that specifically
Top

Good to know and thank you for the response.

Perhaps Battleground is considered more of like an anthology edition then, which is why other books with short stories of other authors isn't on here. I am fine with that.
Top
Post Reply
5 posts • Page 1 of 1

Return to “Other Edition Questions”