Hello, brand-new here (don't be too hard on me!). I'm a longtime bookseller/collector, but it's only been recently that I've put King books back into that mix, although I've been reading him for decades.

I've never had any interest in collecting book club editions, but against that judgment (and my tight purse strings), I just took a bit of a plunge and bought a signed BCE of Carrie. There's no question that the signature is authentic, and it appears to be a BCE from the time of the novel's original publication (don't know the gutter code yet). Nonetheless, it's still a book club edition.

I'm not sure how I feel about this — i.e., if I have buyer's remorse or if I feel it was a worthwhile purchase.

So, I'm curious what others' thoughts on book club editions are when you factor in their being signed. Let's say, for instance, you have a Fine-condition BCE — more cheaply produced than a retail copy, no stated edition on the copyright page, no price on the dj, etc. — but it's signed (no inscription, just a signature). I'm inclined to say there's a certain appeal there — an "undated" BCE + a nice clean signature — but that's also an easily dispellable thought. At the same time, I've also seen otherwise worthless, late-printing trade editions sell for fairly high prices simply because they were signed.

The only signed Book Club edition I would consider putting into my collection would have to be The Stephen King Library edition due to the fact that there are fewer of them & they feel a little closer to something SPECIAL. Welcome to the forums Corey!

In general BC editions aren't very collectible but there are always exceptions. A signed copy would certainly fall into that list for most people. Just be aware that if you sell the copy down the road, you have to disclose it's a book club edition and most of the value will be in the signature, so the book wouldn't sell for as much as a 1st/1st edition that's signed by King.

Sounds like a nice add to your collection though, feel free to post a pic if you have one!
Top

I'm sure most of the folks on this forum have experienced the frustration of sellers (sometimes quite adamantly) trying to pass off book club editions as first trade editions (e.g., eBay listings with "TRUE 1st Printing" in the title, except it's obviously a BCE). I'm especially sick of copies of It with white end papers, no price on the dj, etc., attempting to be sold as first printings.

As I mentioned, I've never had any interest in book club editions before, but I wonder if it's worth exploring the differences among them, because there are some. With Carrie, for instance, the early, smaller BCE actually matches the size of the first trade edition, whereas later, larger-format editions — which I've seen listed as "full size" editions, which is not accurate — do not (usually book club editions are smaller than the trade edition). And on the title page, the colophon reads "Doubleday & Company, Inc. Garden City, New York 1974," which matches the first trade edition and is lacking on later editions because Doubleday was no longer headquartered in Garden City from the '80s onward. Those are just a couple examples, although it's debatable whether those qualities would make an early BCE more collectible than a later one (or collectible at all).

What prompted this line of thinking was my wondering if I'd rather have a signed BCE that can be identified as having been published closer to the book's original publication, or, say, a signed 23rd printing of the trade edition. Neither is anywhere near as desirable as a first printing, obviously, but I've just never given much thought to weighing the value of book club editions before.
Top

It’s an interesting perspective. I would say this....the value of BCE copies is set by what the collectors are willing to pay and I haven’t seen any indication that collectors value Different BCE printings differently
Top

The only King signed book club book in my collection is this Science Fiction Book Club one... 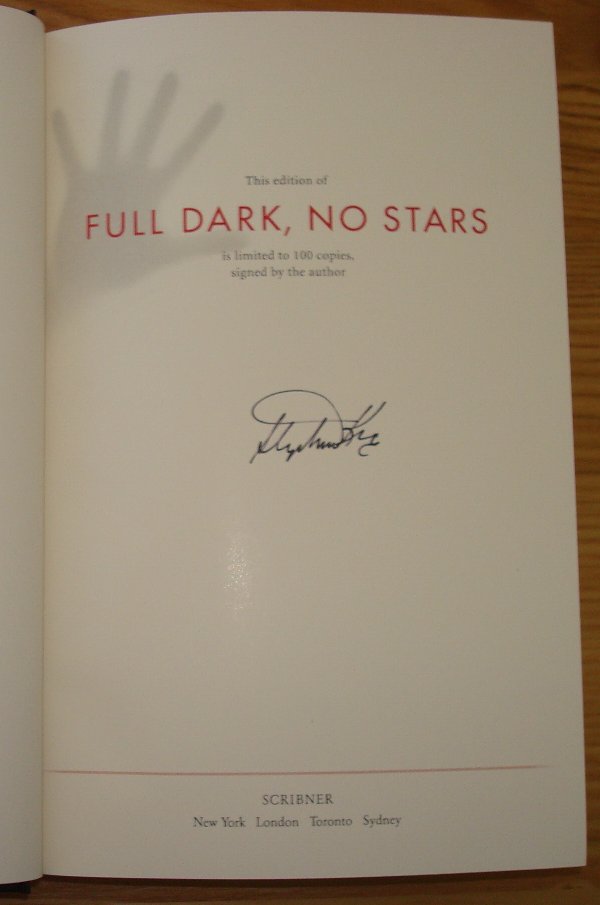 So, here's a boring mini-saga of annoyance involving a lot of what I mentioned previously:

A while back, someone listed a "signed 1st edition" of IT on eBay — an auction with a Best Offer option. The signature was authentic (and beautiful — King really does have a lovely signature), so I sent a reasonable offer, which the seller was amenable to, but I had some questions: Since the listing only had three photos — front of book in a poor-condition dust jacket, title page with signature, and copyright page — I wanted to know if there was a price on the DJ flap, and if the book had gray endpapers. The seller messaged me back to tell me the DJ had no price and the endpapers were white. I informed them that the book was a BCE and I was no longer interested in buying it, and that they should change the listing to reflect that it was a BCE. Eventually, I think they at least dropped the "1st edition" from the listing, probably after getting messages from others. Here's the final listing: https://www.ebay.com/itm/IT-by-Stephen- ... 4662925785

Now, this past weekend, I saw another eBay listing, from a different seller, for a signed 1st edition/1st printing of IT. This book had a nice, mylar-protected trade-edition DJ, but I recognized the signature as the one from the aforementioned book. So, I messaged this seller, with screenshots of the other listing, asking if it was the same book but with a switched-out DJ, and letting them know that I'd contacted the original seller and verified that it was a BCE, not a trade edition — and that the listing should reflect that. Here's the seller's response: "It’s up for auction so people can bid as they see fit. I’m a reseller so as long as I make a profit I’m good. I sell through books so fast I don’t have the time to do all the research is the problem."

I reiterated that the right thing to do would be to change the listing to reflect that it was a BCE, and noted that the signature was still valuable enough that they might be able to make a profit, thinking maybe they genuinely thought it was a first trade edition and it was an honest mistake. Then I checked out the seller's recent completed auctions and wished I'd given them a harder time: They sold a copy of Moby-Dick a few days ago for 5,500 USD and have many other multi-thousand-dollar sales (they had the Buy It Now price for IT set at just shy of 1,000 USD). They knew what they were doing and should have known better.

It appears the reseller has now ended their first listing early, even though it had several bids, and put up another listing — but the only change is the omission of "w/COA" in the title. They're still trying to sell the book as a 1st edition/1st printing, even though they know it's a BCE (and even though, in a couple of the photos, the endpapers are clearly white, not gray). Here's their new, "revised" listing: https://www.ebay.com/itm/AUTHOR-STEPHEN ... 4143670204

I'm extremely annoyed, but I don't know what's to be done. I don't want to keep haranguing them with messages, and there's nothing in the way of reporting the listing to eBay that suits this situation. I hope prospective buyers at least catch the endpaper color in the fourth and fifth photos.
Top
Post Reply
7 posts • Page 1 of 1

Return to “Other Edition Questions”